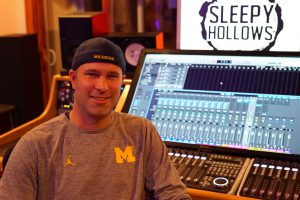 Dan is a Mix/Mastering engineer who got his professional start originally in Sleepy Hollows years ago. After a chance meeting with the founder Neal, he realized they both shared the same vision for music and recording. With a love of equipment and a knack for research, he helped Sleepy Hollows through several iterations of equipment and design. After a 3 year stint, Dan made a move to Connecticut. While in Connecticut, Dan continued to Mix/Master on a consultant basis while starting to acquire clients in the New England area. After meeting a few artists and being introduced to a few studios in the area, Dan helped to design and re-design several studios. With solid knowledge in studio design and acoustics, Dan helped to design everything from vocal booths in small spaces to large live and control rooms for full-fledged recording setups. Dan made the move back to the DMV area in April of 2016 where he will help evolve Sleepy Hollows beyond the already great studio it is, while simultaneously serving clients.

Back to Staff
Scroll to top